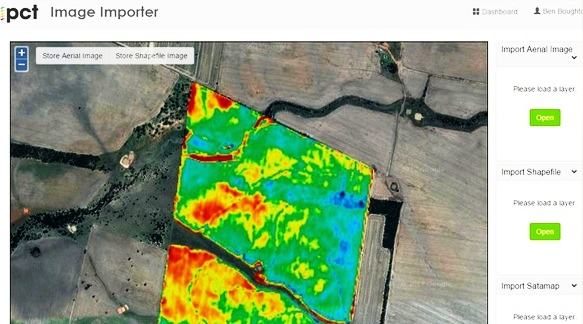 Another revisit, this time James Miller from Penagcon in 2016:

Well it’s 2016 and what better way to start then reflect on the year that was. For the team at Penagcon (who are passionate forward thinking agronomists and crop their own country near Bellata, NSW) something that stood out this year was soil acidity in chickpeas. When I emailed James Miller to answer a few question about Satamap he finished with how Satamap has helped them identify and begin to look at ways to solve the problem with soil acidity. The response to my questions are below.

– What reservations you before trying Satamap?

We began using Satamap in early April 2015 to gain another view of crop production. Initially I was interested in comparing the images to previous yield maps and paddock histories and being familiar with NDVI, I was keen to observe whether these would correlate to the Satamap images.

– Did it meet or even exceed expectations?

Satamap images for the 2015 season and previous seasons (13 & 14) generally correlate very well to our current fields’ performance characteristics and where available previous yield maps reference very closely to the images.

– How do you use it in your business?